International artists and creatives are set to descend on Sydney with the announcement of the fourth annual Vivid Sydney program that will transform the city into a canvas of light, music and ideas from 25 May – 11 June. 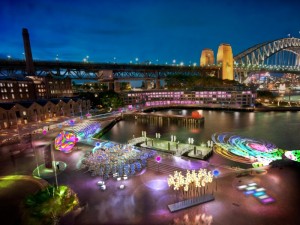 The largest creative industries festival in the southern hemisphere, featuring live music performances at Sydney Opera House, creative industry events and large scale light installations around the harbour foreshore, Vivid Sydney was recently ranked as one of the world’s top ten ideas festivals by The Guardian newspaper in the UK.

Developed by Destination NSW on behalf of the New South Wales Government, Vivid showcases Sydney as the creative industries hub of the Asia Pacific, with over 500,000 visitors and Sydneysiders expected to attend the free and ticketed events this year.

In 2012 award-winning German light collective, URBANSCEEN will design the centrepiece of Vivid Sydney, the lighting of the Sydney Opera House sails.

The full Vivid Sydney program is available at http://vividsydney.com